Methodology – I am a mobile DJ based in Central New Jersey and spin in a variety of settings from weddings to bars/clubs.  I am particularly fond of electronic and international music.  The selected songs below incorporate all styles of music and tempos with the songs in the #25 – #40 slots representing some songs that were personally enjoyable to me, but that may not have charted well or been heavily requested.  The Top 25 songs of 2017 are highly correlated to requests and dance floor impact captured at my 200+ performances during the year.

Musical Trends –  It’s a an exciting era to to be a DJ with so much music available across a variety of mediums.  The increasing popularity of streaming services like Spotify has enabled me to easily explore and organize all of the music from across the globe that I could ever want.  One of my other favorite places to research music is in the car listening to commercial-free Sirius radio.  Currently my favorite channels are Venus (Rhythmic Pop) and Chill (Channel 53).  Is there a catchy song in your daily travels that you want to identify?  Of course, use the free app Shazam.

As previously identified by my colleague Mike Bacon (aka, DJ Iron Mike), euphoric EDM music faded from the musical scene in 2017 and was replaced by a demand for mid-tempo tropical house compositions or collaborations between electronic producers like Calvin Harris with rappers like Migos.  “Trap Rap” (aka “drug music”) remained immensely popular with artists like Future, Migos and Lil Uzi Vert, and exotic dancer turned rapper Cardi B blew up big time with her hit song “Bodak Yellow.”  Ed Sheeran had a great year with Shape of You, Galway Girl and several ballads.  The members of “One Direction” also achieved great acclaim as solo artists in 2017 with hits like “Slow Hands” (Niall Horan) “Sign of the Times” (Harry Styles) and “Strip That Down” (Liam Payne).  Latin music was big in the pop arena, with mega hits by J. Balvin (“Mi Gente”) and Luis Fonsi (“Despacito”).

As we look into 2018, DJs crave a musical breakthrough with a new sound – and hopefully one that is more upbeat and dance floor friendly than trap rap at its dreary 60 to 70 beats per minute tempo.

Check out the list below, and you can listen to the songs on the Spotify playlist embedded later in this blog.

34. Attention – Charlie Puth (pop) * I suggest using a remix to juice up the tempo and reduce some of the uncomfortable slowdowns in the original.

33. Sign of the Times – Harry Styles (pop) * One Direction alumnus

31. Tennessee Whiskey – Chris Stapleton (Country) – while this bluesy cover version was released in 2015, the song’s full power has grown on me like a fine Tennessee whiskey.

28. Disco T*ts – Tove Lo (pop/electronic) * Definitely opt for the radio edited version of this Swedish star’s song when families are in the building.  For a good laugh, check out the music video.

26. I Feel It Coming – The Weeknd w/ Daft Punk (R&B) * One of the only songs to repeat from the 2016 playlist.  The Weeknd with Daft Punk is a divine collaboration.

25. It’s Everyday Bro – Jake Paul w/ Team 10 (YouTube Rap).  * This is an example of the type of track being requested by teen dance audiences.  Songs that may not be commercially available (although this one is).  This track logged 167 million YouTube views.

12. Mask Off – Future (hip hop)  * The hypnotic flute and Future’s chants of popular street drug names will draw you in.

10. Feel It Still – Portugal. The Man (alternative rock)  * Portugal.  The Man, a band from Alaska, has been together since the early 2000s and finally scored big with this hit!

8. Can’t Stop the Feeling – Justin Timberlake (pop)  * Despite being released in 2016, the song’s presence and dance floor power remained strong in 2017.

6. That’s What I Like – Bruno Mars (pop)  * This feel good sing-a-long by Mars is a great late night selection.

4. Bodak Yellow – Cardi B. (hip hop) * Cardi’s unique rap cadence and swagger made her an international superstar in 2017.

3. Shape of You – Ed Sheeran (pop) * A great party starter… for added percussion, we recommend DJ Cloak Dagger‘s Shape of You Moombahton Edit.

1. 24K Magic – Bruno Mars (pop).  It’s my first ever repeat #1 song!  Released on November 18, 2016, I saw the power of this track early on.  As predicted, 24k became a massive dance floor success with the right energy to get guests moving and grooving.. “players, put yo pinky rings up to the moon!”

Worst Song of 2017 – “Everyday We Lit” – YFN Lucci f/ PnB Rock.  A childish, ridiculous song!  Runner-up would be “Get It Together” by Drake that bastardizes the original song “Superman” by Black Coffee.

Take a listen to the Top 40 on the Spotify playlist below.

Ambient DJ Service is an award-winning mobile DJ entertainment company based in Central New Jersey and servicing the New Jersey, eastern Pennsylvania and New York City markets.  For more information about DJ Gregg Ambient or any of our other talented music mixologists, vist us online at www.ambientdj.com 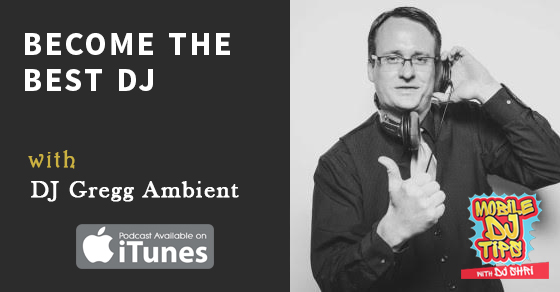 Listen to Our Mixes